Look for the Dumplin Valley website update soon. Due to technical difficulties, we haven't been able to add to or make changes to it and are in the process of redesigning the entire site. It should be ready in the next few weeks. In the meantime, I will put news on here and on the Facebook page. The website address is: www.dumplinvalleybluegrass.com.
Posted by M at Thursday, December 31, 2009 No comments:

You Can't Always Trust Your GPS

I know some of you have seen the big sign in Sevierville warning you that your GPS is wrong. Well, it was brought to our attention at our last festival that those of you approaching us from the East and traveling West on I-40 may be routed off I-40 at the wrong exit. When you come to Dumplin Valley exit the interstate at #407 no matter which direction you are traveling. That is the quickest and most direct route to get here. We are a short 1 1/2 mile from Highway 66 (the road you will be on after you exit the interstate). When you get off the exit, head toward the McDonald's on the north side of the exit. That is East Dumplin Valley Road and we are at 525 East Dumplin Valley Road. This road runs parallel to I-40 and is easy to navigate. If you have any questions, please call us: 865-397-7942. BUT don't trust that GPS lady if she starts telling you to "turn here" or starts telling you to turn around when you go by the other exit. You want to exit at 407; turn toward the north side of I-40; take the first right (East Dumplin Valley Road); travel 1 1/2 miles and we will be on your left. It's pretty simple. But it won't be if you take the wrong exit.............just ask the Lonesome River Band's bus driver!
Posted by M at Thursday, December 31, 2009 No comments:

In addition to some familiar names in our lineup there are a few that you might not be too familiar with. Let's start with The Boxcars. This is a brand new band made up of Adam Steffey, Ron Stewart, John Bowman, Keith Garrett and Harold Nixon. With talented musicians like these this group is bound to become popluar with all you bluegrassers and JuneFestivarians.
Another band which is fairly new......Brand New Strings.....some of you may already have seen them perform as they were winners of the '09 SPBGMA band competetition. Check them out at www.brandnewstringsband.com. They will be here in Sept.
We also have for the first time this year in the Sept. lineup, Darin & Brooke Aldridge, a wonderful husband and wife team who have recorded some great songs. You can find more info on them at www.darinandbrookealdridge.com.
Jerry Butler has a new band...Jerry Butler and the Blu-J's with a new cd worth checking out.."Haulin' Grass". We're sure you're going to enjoy them at JuneFest. And we always look forward to seeing his #1 fan, Miss Sami :)
You might want to check out G2 on the web at:
www.g2bluegrassband.com. This band comes to us in September all the way from Sweden. And, yes, they are a bluegrass band! Let's make sure we show them what southern hospitality is like :).
The Travelin' McCourys. hmmmm where have we heard that name before?? Oh, yes.........as in Del McCoury......... But Daddy Del won't be part of this ensemble. Here's your chance to see what the boys are up to when Daddy isn't around! Plan on joining us for JuneFest to hear this band.
Last, but certainly not least, we are bringing a familiar name with his band to Dumplin Valley for the first time........Lou Reid & Carolina. Lou has performed here a couple of times with Seldom Scene but this will be his first trip here with his own band. We are certainly looking forward to this. He'll be joining us in JuneFest.
Now that we have filled you in on the new additions to the Dumplin Valley family of musicians, we want to remind you that in addition to the above mentioned groups we are bringing back some of your favorite bands in 2010: June: Bluegrass Brothers; Paul Williams & The Victory Trio; Jimbo Whaley & Greenbrier; The Expedition Show (formerly Williams & Clark Expedition); JD Crowe; Junior Sisk & Ramblers Choice; Balsam Range; Barry Scott & Second Wind; Carrie Hassler & Hard Rain (mmmm hope she brings Moon Pies with her again!). September: Rhonda Vincent & The Rage; IIIrd Tyme Out; Dailey & Vincent; The Grascals; Lonesome River Band; Michael Cleveland & Flamekeeper; Paul Williams & Victory Trio; Jimbo Whaley & Greenbrier; James King Band.....& if I have left anyone out........sorry......let me know. Several of the bands have new projects in the works. Keep checking back and I will post news here when I get it. Also, check out our Facebook page.
As you can see, the festival season looks to be an exciting one this year at Dumplin Valley. Many camping reservations have already been made so if you are planning to camp with us, please let us know soon.
Posted by M at Thursday, December 31, 2009 No comments: 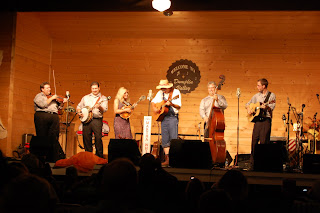 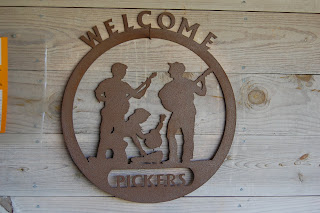 Goodbye, 2009 & Hello, 2010 !!
It occurred to me this morning that time has almost run out to update my blog during 2009. So, here is my feeble attempt to rectify the situation.
Summing up................we had a great festival in September as well as in June this past year and have been planning for 2010 with the lineup being 98% done as of yesterday. Here's the list of bands we have so far:
For JuneFest (June 10-11-12): JD Crowe; The Travelin' McCourys; Bluegrass Brothers; Paul Williams & The Victory Trio; The Expedition Show; Carrie Hassler & Hard Rain; Barry Scott & Second Wind; Jimbo Whaley & Greenbrier; Jerry Butler & The Blu-J's; Balsam Range; Lou Reid & Carolina; The Boxcars; Junior Sisk & Ramblers Choice.
The lineup for our 11th Annual DVBF (Sept. 16-17-18) is: Rhonda Vincent & The Rage; Russell Moore & IIIrd Tyme Out; Lonesome River Band; Balsam Range; Dailey & Vincent; The Grascals; Michael Cleveland & Flamekeeper; James King Band; Darrin & Brooke Aldridge; G-2 (from Europe); Brand New Strings; Paul Williams & The Victory Trio; Jimbo Whaley & Greenbrier.
Posted by M at Thursday, December 31, 2009 No comments: