Inquiries are still coming in.............and, yes, we still have some campsites available for JuneFest. Call us at 865-397-7942 to make your reservations.
Many of you know that we are having a Beans and Cornbread supper on Wednesday evening at 6pm for all campers already on site. So, if you can plan for a Wed. (or earlier) arrival, let us know. Also, there are several people coming in a week prior to the festival and that means nightly pickin' and jammin' in the barn and campground.
Posted by M at Friday, May 30, 2008 No comments:

Is it just me or do all these "kids" graduating make you feel old, too? This is the biggest year for us since our own children graduated. Let's see, there's Samantha M., Samantha I., Anna G., Nicole M., Zack S, Ethan S. plus a few more. A couple of them haven't lived here in a long time so when I realized they were graduating, it was a shock as I still picture them the way they were when they moved away................little and cute. Now they are grown and gorgeous. How did they all grow up and change while I'm still the same?? ha Hmmmmm.....maybe I should take a closer look into the mirror. And even though Sami has always lived nearby, gone on nearly every vacation with us and we've watched her mature, it's still somewhat of a shock to realize that she, too, is "entering the real world". The world certainly has changed since I was facing graduation. But some things are still the same - after the ceremony there will be new adventures, new people to meet and choices to make. I know these "kids" will do fine making their mark on the world. It's going to be good to sit back and see what they will do to make us all proud. Good Luck to All the Graduates of 2008!
Posted by M at Monday, May 26, 2008 No comments: 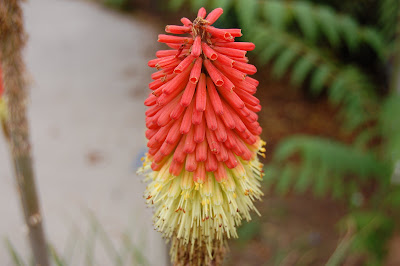 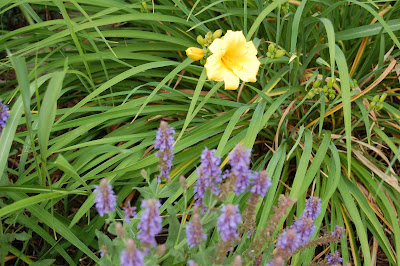 As you can see, Joe's "project" is nearing completion. It finally got some paint on it and the fans are hung. Now he has to finish up with the lights, etc. This is going to be a great place for picnics, jammin', and whatever else we need the space for.
Reservations are coming along nicely for JuneFest. It looks like we might have a big crowd for the first one. The lineup is great and we are praying for good weather. If you haven't made plans to join us, it's not too late. We'd love to have you.
And if you're planning to camp, there are several folks coming in a few days early so there is sure to be some good pickin' every night in the barn and in the campground. That's always fun for us. Come early and stay late!
Have a good Memorial Day Weekend!
M
Posted by M at Sunday, May 25, 2008 No comments: 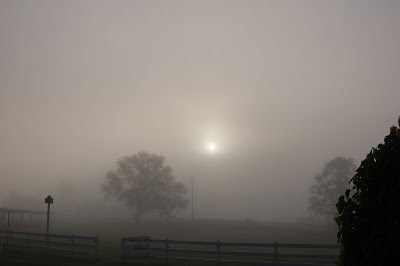 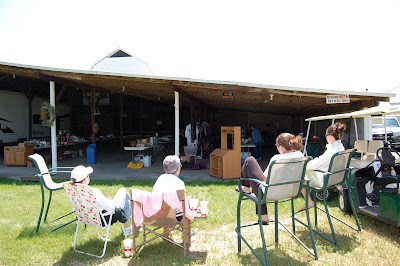 What a day for a yard sale! It was foggy, damp, cold and breezy. But it did turn out to be a nice day. We had a great selection of good "stuff" but nobody was shopping much. I think maybe they were home mowing or something. Anyway, we sold enough to pay for our gas and the advertising. All that work and hardly any customers! Well, all was not lost...............we had a good time visiting with each other while we waited for someone to stop by.
Posted by M at Monday, May 19, 2008 No comments: 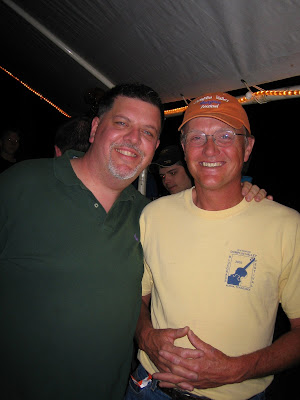 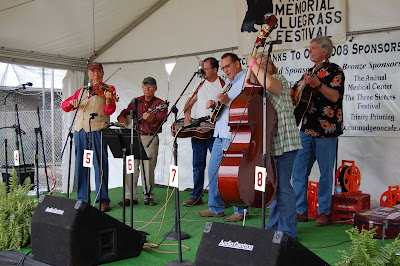 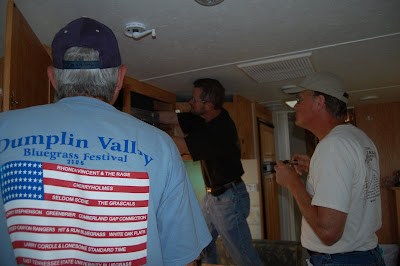 We just returned from a fun weekend of camping and "bluegrassing".
It had been 3 years since we attended a festival in Chattanooga so this year we
took off and went to the Boxcar Pinion Festival. Cindy had a good lineup and
the weather actually turned out pretty good. We had about 2 hours of stormy weather on Saturday morning but the rest of the weekend was good. I have decided that
foul weather and bluegrass somehow go together as it is rare to have a whole weekend without the weather turning on us at least once. But true festival fans are a hardy bunch and don't let a little thing like bad weather ruin good music.

As you can see by the photos, there was plenty of Grinnin' going on. Joe sang some with IIIrd Tyme Out's Steve Dilling on Friday night. And Fletcher Bright's "grin" looks blissful. He really loves the music and has been playing for many years. He (along with Barbara Lamb and Bob Chuckrow) actually played at my daughter's wedding and it was great. Thanks for the beautiful music, Fletcher!!

By the way, how many guys does it take to hook up a cable tv connection?? Three - one to direct and two guys wearing Dumplin Valley Shirts.......Bob, David and Joe. Actually, I think another guy came in and helped, too. But he wasn't there when I caught that Kodak moment.

We saw a few of our Dumplin Valley Festival folks down there, too. It was good to see everyone. And we look forward to seeing the folks we met over the weekend when they come to Dumplin Valley.
Posted by M at Sunday, May 04, 2008 No comments: