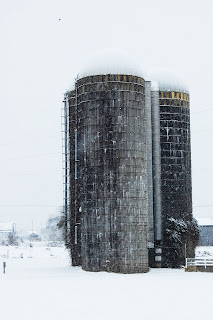 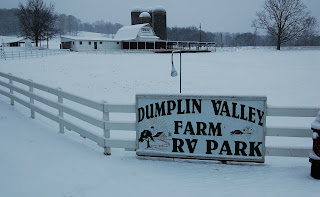 Standing stately and tall as sentries these old silos have weathered many seasons including Christmases and bluegrass festivals. Every year I say I want to decorate the silos. But so far we haven't come up with a good plan. Maybe one of you can make a suggestion for next year. I've always wanted to place a star on top of one but it would take a ladder much longer than any of ours to accomplish that feat. Maybe we could enlist the help of our local electric co-op.
As you can see from the photos posted here, we have a decent blanket of snow covering the farm today. Yesterday was a lovely snowy day, too. It was the answer to many prayers for a white Christmas. According to the local weather stations, 1969 was the last year we had a decent snowfall on Christmas.
Oh, my.....1969......what a year. I wonder how many of you remember 1969. It was quite a year for us....both happy and sad. It was the year that we graduated from high school; Joe's mother passed away; we started college; Joe began service in the Air National Guard and spent Christmas Day in basic training (what a way to end that year). In 1969 we actually used telephones to talk to people..............not send texts, check e-mail or take photos. And the word "blog" didn't exist in 1969 as far as I know. I suppose I would have thought it to be an alien from "outer space" or something as space exploration was on everyone's mind then. That was the year that Neil Armstrong took his walk on the moon. Now that was quite a spectacle on a little black & white tv.
In 1969 the closest thing I had to a computer was a manual typewriter with that little bell that dinged at the end of each row. ha ha Boy! Have things ever changed!!?! I wonder what kind of changes the upcoming year of 2011 will have in store for us. Let's hope it will be a healthy, prosperous & peaceful year for everyone.
Posted by M at Sunday, December 26, 2010