Bluegrass On The Move

What a great weekend of music.  It began with fine performances by The Dismembered Tennesseans, Brand New Strings and also Balsam Range at the Bijou Theater in Knoxville on Saturday night.  All three bands provided a much needed break for us as it had been a long dry spell without attending any shows.  It was so good to see lots of our Dumplin Valley friends there, too.  The show was the first in a series of shows to be presented by WDVX.
The next stop on our "weekend tour" was a "special" blueplate special at the WDVX studio on Sunday afternoon.  That show featured Balsam Range with their very special guest, John Driskell Hopkins (Zac Brown Band).  What a show that was!   All those guys have a new project just released and it is called "Daylight".    If you're looking for some great music, check it out.  Here is a link for more info on the project: http://bluegrasstoday.com/daylight-john-driskell-hopkins-balsam-range/
After the blueplate both bands headed over to Thompson Boling Arena for a show with the Zac Brown Band.  I wish we would have had tickets for that.  Would love to have seen our friends from Canton on stage with ZBB in front of 1,000's of fans.   I heard that Balsam Range made all of us bluegrass fans proud with their fine performance.   And I bet they gained a few fans last night.  Hopefully, some of those folks will come to Dumplin Valley to see them in September.  Wouldn't that be great?!
We should have the lineup finished this week.  In the meantime, here's a list of the bands we are proud to present for your enjoyment this year:
Thursday, 9/19/13:  Paul Williams & The Victory Trio; Donna Ulisse; Jimbo Whaley & Greenbrier; Cordle, Jackson & Salley  Friday, 9/20/13:  Rhonda Vincent & The Rage; Little Roy & Lizzy Show; Balsam Range; The Dismembered Tennesseans; The Spinney Brothers  Saturday, 9/21/13: Lonesome River Band; The Crowe Brothers; The Roys; Junior Sisk & Ramblers Choice + TBA 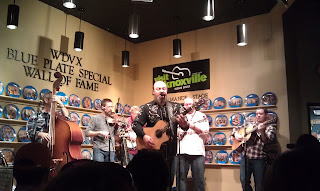